We booked a Lodge at a site near Aysgarth and planned some routes in the local area, we had seen the weather and hopes weren’t high if we’d get any done but we could hope. Using the AA routes cards we decided to have a look around Semer Water near (ish) Hawes.

The sun wasn’t blazing but the rain was managing to keep off as we turned off the A684 to drop into the valley to Low Blean and park at the north east point of the water. My mistake here, I had quickly planned this route not looking at the map in great detail.  The route card looked simple and low level well, it mentioned a few hills but nowt to write home about.  With this in 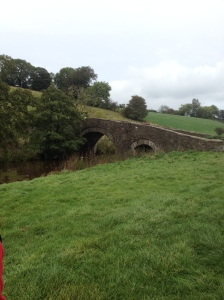 mind I carried my shoulder bag, which is in fact a fly fishing bag that I use everyday jaunts out.  Kel calls it a ‘man bag’, but it’s a cool green bag that looks mint!  Alfie was itching to get into the water so we threw a few sticks into the water at the start, hopefully he would be dry at the end.  We took a left out of the car park north to cross Semer water Bridge and up a slight hill towards Countersett.  It’s a steady climb, nothing to make you sweat but Kel began to fume immediately, “I thought there wasn’t any climbs in this route!” she was wearing jeans and thought this was a  low level and hadn’t mentally prepped herself for a climb.  I don’t get this line of thinking, our walking partner Sue also thinks like this, I just think if there’s an incline then it’s there, as long as we aren’t heading above a certain height were it can become a problem if something goes wrong, I’m happy enough.

Anyway, we crossed the X junction at Coutersett and up another hill, I could see the field we had to go over going west and I could see the path going up the tail end of Countersett Bardale and onto the top, I braced myself for more ear ache. We came off the road and I scanned the field for Alfie’s new toys – sheep that run.  He thinks that if he runs at them, they want to play by running away, but I’m sure the farmer who was actually on the main road wouldn’t think the same.  He has no malice and if one stopped and squared off to him he’d probably turn tail and run off, but I farmers don’t see it that way, even though they chase their sheep all day with border collies?!

So, back to the choice words Kel was filling my county’s air with as we headed upwards, she didn’t like these ascents very much. The hill was littered with rabbit holes which kept Alfie busy as we reached the top.  I don’t mind when he vanishes for a while, he is a Springer after all and they do that from time to time.  You can usually see the odd flicker of his black and white tail in the undergrowth as he sniffs out the wildlife, however on this occasion as we

reached the top just before the first gate crossing, we had a ‘Fenton’ moment.  He had wandered off and after a bit we heard the sound of feet pounding the moorland, I thought it was Alfie coming back to my whistles.  No, I looked towards the sounds of pounding peat and I didn’t see my loving Springer heading over the hill, I saw about 5 or 6 sheep giving it legs across the path and down the hill, closely followed by my Spaniel.  He had them in a tight little group which I thought was impressive, but I don’t think the farmer would be impressed.  He recalled straight away as we reached the wall crossing, I scanned the moors and the only sheep I could see were about quarter of a mile away over the other side of the hill, he has obviously got some speed in 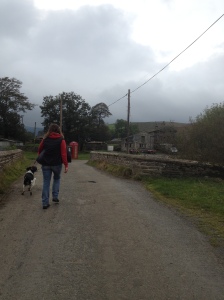 those skinny legs.  Once on the top we had a great view over the surrounding moors and hills, sheep were in abundance so puppy was on his lead as we made our way across the numerous ‘shake holes’ that littered the plateau of soggy peat and sheep crap.

After about a K we searched for the left turn south to take us back down the fell towards Marsett and a steady downhill towards the collection of farms in the little village. I had a good scan of the landscape and to my surprise the sheep were staying on the top of the hill so Alfie had a field of sheep free fun. Near the bottom was a field with a handful of cows chewing the grass, there was a decent wall before we joined them  and the dog went back on his lead.  I’ve never had a problem with cows but Kel was getting a bit twitchy, she brought up our friends that get very disturbed by cattle and it made me think about the poor lad that got trampled to death on a hike.  I got a little bit wary as we passed the cud chewers, especially as one was trying to stare me out as we passed.  It dawned to me that we were in Yorkshire and the cows will be a lot harder than elsewhere, so as we passed I gave it a good hard Sheffield stare which seemed to keep it at bay.  The next field had another two potential burgers standing near the stile out onto the track near Green Head.  The stand-off was on, we walked across the small pasture as the two cows stared intently as we invaded their field.  It became apparent the younger black cow was very interested in us, Alfie was being good as we

approached the wooden crossing in the fence to safety.  The cow made its way over to us and I heard my wife say, “Get my puppy over that fence” as the cow got really close.  I negotiated the stile like a professional and Alfie ran under the wooden support, which left only Kel to clamber over the slippery timber crossing closely followed by Ermintrude. It looked like the cow had head butted Kel in the rear as she jumped over the stile, we laughed uncontrollably on the track like kids just been caught apple scrumping as Kel shouted, “I could feel it’s breath on my

We wandered down the track into the smallest village I’ve ever been to that seemed to consist of a couple of farms an old red phone box and a post box. We turned left in the village and followed Marsett Beck onto the path across the surrounding hill near Stalling Busk across a few small fields to the remains of a chapel and the first people we’d seen I a good two hours.

The walk back to the car was pleasant and only one lazy cow to negotiate, but hey ho I married her and that’s my problem. We hit the road near Low Blean farm and the road back to the car park, Alfie wanted another play in the water so we spent a few minutes at the water’s edge.  I noticed the smallest of smallest info boards near the big information saying pay and display.  A quick glance at Kel who also saw the notice, we laughed and dismissed the sign.  We arrived at the Aygo with a ticket on the window asking for £1.50.

The moral of the story is, whenever you park somewhere, make sure you look everywhere for the world’s smallest signs in case you have to pay for one of the most remotest car parks ever!

We had to pop into Aysgarth Falls pub for a post walk pint, great pub highly recommended!