What are we calling it, Daysack, Daypack or Rucksack?!

I think mainly ex military call them Daysacks as we used to use ‘Daysacks’ for range days or carrying a small amount of kit for day exercises etc.  The serious stuff went in our Bergans when we were out for days at a time.

But for my days out in the hills I have been using my trusty North Face 30 litre Daysack.  I’ve had this for at least 8 years now and it was starting to get a bit tired.  When I say tired, I mean bloody exhausted!  It has the old fashioned stretchy mesh compartments on each side, which I used to store my Sig bottles.  But over the years the mesh has become a bit ‘saggy’ and for the last couple of years my bottles have started to fall out when crossing stiles and when taking the Daysack off for whatever reason.  Which usually resulted in me decorating whatever landscape I was in with a deep colour of blue with my language.

Also I was finding the amount of kit I have been carrying has been increasing, especially in the winter, and my old 30 litre was starting to burst at the seams.  I prefer to have a bit of spare space rather than buckle straps at their maximum.  Plus, and I’m gonna get some stick for this, my pet hate out and about, is kit strapped to the outside of a Daysack.  You see them out there, hikers who set of with way too much clothing on and decide to strip off halfway up a fell, but instead of storing it away, they strap it to the outside resulting in bits of kit flapping about in the wind.  I understand hikers who are out for days on end having kit strapped to the outside, like roll mats etc.  I’ve even seen hikers with what appears to be a nearly empty Daysack, still with kit strapped to the outside!

Anyway, rant over, I’ve gone for the Osprey Kestrel 48!  My walking pal has been using an Osprey for some time and I have seen them in action.  He’s a DofE assessor and runs a troop of Explorers and gets the most out of his kit.  I’ve been saving specifically for a new Daysack and decided to take a trip to Go Outdoors in Stockton to have a look.  I saw the one I liked the look of, green of course.  I asked one of the blokes about the one I’d spotted and what’d ya know.  He fitted it for me, measured my back and altered all the straps, showed me how to pack it, the works,  I was waiting for a rub down and a Shiatsu, but apparently the service doesn’t include this!  Bless the bloke, didn’t have the heart to tell him I’ve been packing Daysacks for over 30 years, I let him have his moment. 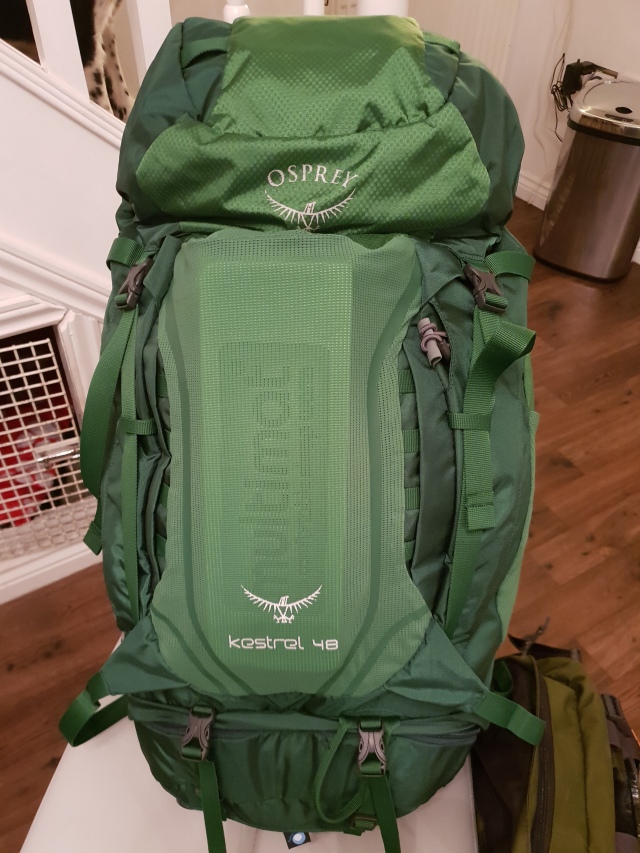 This choice is no reflection on North Face kit, my old Daysack hasn’t gone to the great kit heaven in the sky, nope it’s been given a part time job as my course attendance bag.  Carrying much lighter kit like books, folders and pens!