Whilst I was grafting hard on nightshift, Kel was doing her usual and sat with a glass of wine and the iPad on overdrive. She did find, I don’t know how, an activity that includes a couple of our pass times and an element of fun, which we can introduce to our 6 year old son Oliver. It’s called ‘Geocaching’!

To those who don’t know, this is a kind of Orienteering but with a twist. For a start there’s no running involved, unless you want to that is, it can be fun and all the family can get involved. 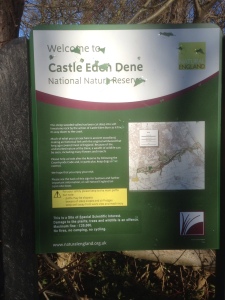 It involves finding containers with items in which are hidden around our countryside using grid references and location descriptions which are set out on a website specifically designed for Geocaching. Basically, you get a good sized Tupperware container that is one of those ‘clicky shut’ design. Then place in it any amount of items and also a small note book so that anyone who finds it can leave messages. The idea is when you find the container, either take and item and replace it with something of higher or similar value, or just leave a message for future finders. There’s even an iPhone app for it with a half decent GPS on it. 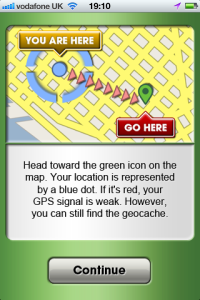 Anyway, we logged in and found a few in our area, so today we thought we’d have a look and see what sort of stuff is being left and what sort responses are being left.  We were a bit strapped for time so we drove to a place where we could park about quarter mile from where the Cache was hidden.  We both have iPhones and the app so I switched on the GPS took us within about 20 square metres of the site. Obviously if we’d had more time and were in a location unknown to us we would be using a map, just for starters we thought we’d use the app.  The app updated almost instantaneously in relation to the satellite image and our position.

The description said it was hidden by twigs and leaves, I was thinking it was a bit vague as we were at the start of the Castle Eden Dene which is a massive expanse of woodland. At this point we both focused around a massive tree and the area around, within 5 minutes I heard Kel shout, “found it!”. Now I’m not gonna give the location away but the container was indeed full of items, and a note pad with a number of entries. There was a CD, DVD and all sorts of stuff and a laminated instructions card inside. We quickly looked through the container, made an entry in the note pad and replaced it with the original covering.

Throughout the ‘find’ the app was asking questions, if we’ve found it etc.

We trundled back to the car and decided that we have found a new hobby.  Not the most adventurous of activities but if you’re stuck for something to do or want a quirky twist to a hike, try it out!